Researchers of the laboratory Hematology and Immunology investigated the immunomodulatory properties of epigenetic modulating agents in multiple myeloma.

Multiple myeloma is an incurable cancer of plasma cells that grow in the bone marrow. Although current therapies have improved patient outcome, patients inevitably relapse. It has been acknowledged that changes in how the cancer cells uses their genetic material contributes to relapse. These so called “epigenetic” changes have been recognized in many cancer types and stimulates research on reversing these epigenetic changes using epigenetic modulating agents. A second reason for relapse of MM patients is the evasion of the immune system so that cancer cells are no longer efficiently recognized and removed by the immune system. Therefore, it is important to understand how the immune system can be restored so tumor cells are removed properly. 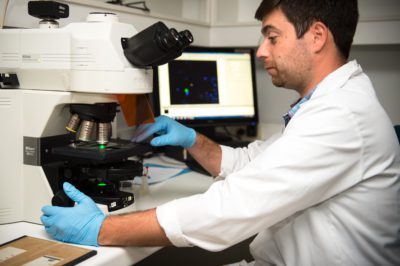 Ken Maes explains: “We became interested in how the use of epigenetic modulating agents may influence the anti-myeloma immune response. We recently reported on the immunomodulatory capacity of epigenetic modulating agents as a new approach to boost anti-tumoral immune responses using the murine 5T33MM model for multiple myeloma. We focused on the induction of immunogenic cell death, a process where dying cancer cells stimulates an adaptive immune response. We found indications that multiple myeloma cells are unable to efficiently undergo immunogenic cell death, which could be linked to a disbalance of tolerogenic and immunogenic molecules upon treatment. Interestingly, we found that epigenetic treatment triggered increased immunogenicity of myeloma cells and alterations in the immune cell composition of the bone marrow which are in favor of an anti-myeloma immune response. These findings may have clinical implications. Disturbance of the process of immunogenic cell death may trigger relapse in patients, as the immune system will not be primed properly after treatment, resulting in inefficient induction of effector immune cells. Epigenetic treatment may overcome certain limitations in these processes leading to reversal of immune tolerance. With this study we hope that an efficient combination of epigenetic treatment and immune therapy can be identified in the future to prevent relapse in multiple myeloma patients.”